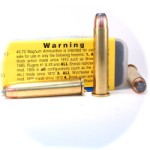 All Marlin 1895 (1895 Marlins are all model 336 actions, chambered in 45-70) iterations made since 1972, all Browning 1885 and 1886 copies, Rossi Rio Grande, New England Arms Handi Rifle, T/C Encore, ALL falling block actions made of modern steel such as Ruger #1 and #3, Shiloh, Christian and Pedersoli Sharps, Henry Lever Action Rifles, all Winchester 1886 iterations made since 1915, CVA Centerfire Rifles and all Siamese Mauser bolt actions.

Item 8B -- the bullet utilized expands to an inch or more in diameter at our velocities, and hence penetration is limited to about two feet in flesh and bone. This is the single most effective hog and black bear load ever devised in 45-70. I don't use it on animals weighing more than 800 lbs as it won't give adequate penetration at bad angles for animals larger than 800 lbs. If you'll limit yourself to broadside (double lung) and CNS hits, this load will work on 2,000 lb animals.

Item 8C -- The bullet we utilize in this load is very tough and gives only a small to moderately sized mushroom (about .60 cal) and because of the smallish mushroom, it penetrates very deep -- about 4 feet in muscles and bone and as such is a great bullet for use on dangerous game and smaller game too as it does expand some. This load is the most versatile of our 45-70 loads. 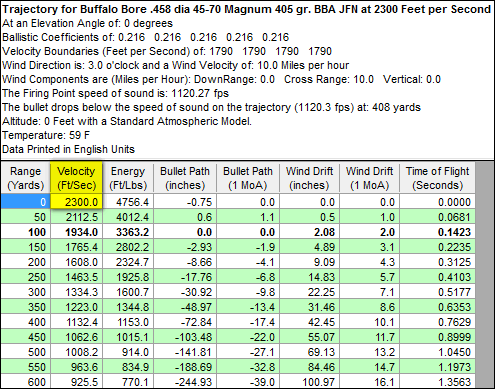 Tim, Here is a photo of a Black Bear I got in northern Manitoba the first week in June of this year. I was using your 405 grain expanding load as you had recommended it in the past. The bear came into the bait and stood up on a barrel with his back to me. I was in a tree stand, 30 yards away. I shot him just below the center line between the shoulder blades. The bullet broke his spine, tore up his lungs, and came out his throat, severing the windpipe and major arteries. He fell over stone dead, never moved or felt a thing. This was a 6'6" bear, roughly 350 pounds. This is the second Black Bear I have gotten with your cartridge and the results are devastating and immediate. Robert Dean Rollins, MT 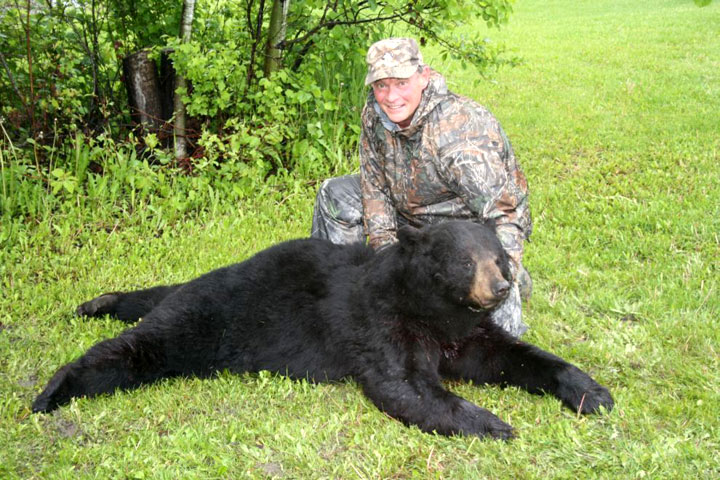 Have been using the 8b ammo on eastern North Carolina black bears for the past 8 years killing bears from 220-675lbs with NO problems!! When the hounds have a big 500lbs bear bayed out/treed you need ammo that is going to do the trick the first time!!!
Cory Rich on 11/09/2017 08:31pm

Tim & Buffalo Bore Team,
I just wanted to email you guys about the great hunting season I had this year.  With your 45-70 8B ammo I took a nice whitetail buck at 190 yards thru both lungs.  The entry wound was impressive as was the damage to both lungs.  Two days later I shot a cow elk at 348 yards thru the upper neck/spine.  Your advice on peep sights & ammo was spot on & gave me the confidence to take those shots.  Having practiced at 200 yards extensively with some 300-yard shots mixed in also at the range was important, but knowing that heavy bullet would do its job was the kicker.  Thanks again & I now have a stockpile of 8B & 8A for future use.  Using them 1886 certainly added to this year's hunt. 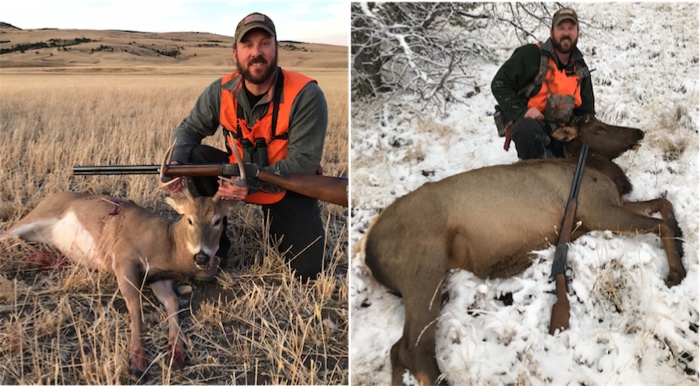 Dear Tim,
Here are the 2 pix that I put together to show the expansion of the 405 gr. JFN.
It did its job and was very impressed the way it performed on the Buffalo that I took a couple of weeks ago. It was a Cow and was in the 8 to 900-pound range. It was just the size I was looking for. It lodged on the exit side in the skin after going threw bout 30 " of flesh and bone.
I have some 500, and 540 grs. but this 405 served the purpose.

Thanks for a great bullet,
Albert Fumuso

Just took my 2nd black bear using 8B, 405 JFN out of my Marlin GG. Bear about 30 yards quartering away.bullet entered left side (lung) and exited right side (and upper arm). Bear only went 20 yards (downhill) before expiring. The blood trail (amount of) was amazing. This ammo is #1. Please keep making it!
Rick Bohn on 12/13/2014 06:40am

I have run buffalo bore ammo consistently in my both my .45-70 calibered guns (Ruger No. 1 and Marlin Guide Gun) and have had spectacular results. My recent a black bear @ 35 yards and was instant lights out !! No tracking required.
Danny Cantrelle on 12/20/2011 08:04pm

I bought a box of the 405gr jfn , these rounds are very consistent , groups well . Dropped a whitetail deer in 2010 season in Ms. She was at about 60yds , I hit the trigger , she tipped over zero movement after the shot . I recently dropped a coyote at about 70yds it dropped as well , the exit on the coyote was the size of 2 liter coke bottle . The best high performance ammo out there . I highly recommend this ammo to anyone who likes confidence behind the trigger
Fred from PA on 07/22/2011 11:58am

I shot this canadian black bear with my marlin guide gun (stainless w leupold scout scope) and the buffalo bore 405gr JFN (8B). Bear was facing away from me and the shot angle from above left hip into the chest cavity...bear ran 20 yards before dropping. This round was devastating to say the least. Great penetration, a few feet (despite it being labeled an 'expander') and dramatic results. The bear was just shy of 300 lbs.
I have had incredible accuracy with the BB 350 and 405 JFNs. Great products.
Barton Riberich on 08/19/2010 03:58pm

I have used this particular ammo for the last two bear seasons and have harvested two bears with it. My last bear was a 410 lb black bear from Hyde County (in eastern NC). The bullets are absolutely devastating on bears! I shot the bear facing me, and it travelled through the length of the bear and broke the hind leg. That is called penetration! Thanks for making excellent ammo! --Wil
Bob Schultz on 04/01/2009 02:53pm